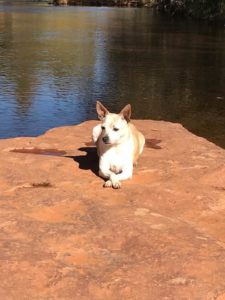 I did an energy reading and healing on this pooch. Her name will remain anonymous to protect the innocent. Ha ha. This lil' girl has some issues just like the rest of us. I wanted to write about what I found because I think it will help people to understand that just because we do not speak the same language doesn’t mean animals don’t go though as much as people do, with all the emotions of the rainbow. I saw that my doggie client has some severe emotional issues regarding being left behind. This makes her shake, fearful and have seizures. When I looked at her energy field I saw a number of things, but what stood out the most were two of her past lives. In the first one, she was a white Labrador and she had two kid friends. One day their father came with a big rifle and shot her. To this day she felt the pain of that experience and did not understand why they killed her. My clients owner told me she has always been terrified of guns. The second past life that came up was a very long time ago. She lived in a small village and one day her owners took her into the woods and left her there. She did not understand why and her owners never came to get her. They abandoned her. This has cause emotional damage. When I read the energy I saw that her owners brought her to the woods to protect her. Later that day the whole village was pillaged and burned. Her owners never came back because they were dead. This doggie client also does not like to be pet or touched. Every day now her owner has the assignment to "force" massage her dog for 5-10 minutes before her dinner time, so that there is positive reinforcement that follows. Her owner has reported it is helping her to work through her issues! Yeah!!! The moral of the story is that "dogs are people too." They get confused just like we do and need healing. 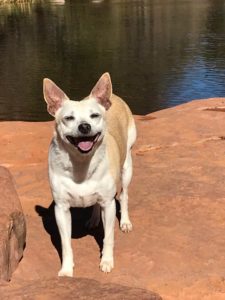 Subscribe to the Sage School Of Light Newsletter to receive spiritual and health tips, discounts and class information.